Storyteller Rodney Kemp insists that Cedar Island is not the end of the world, but you can see it from here on a clear morning. (Photo by Dan Williams)

Have You Ever Been Down East?

On US 70, just beyond Beaufort, you’ll find yourself traveling on the Outer Banks National Scenic Byway, one of only four national scenic byways in North Carolina.

As you cross the North River, you are officially in Down East territory, although there’s an absence of “welcome to” signage.

Carteret County historian and storyteller Rodney Kemp says, “The term ‘Down East’ is a nautical term. During the sailing days, the mail boat would make its deliveries to each eastern Carteret County community. Normally, the prevailing sou’west wind would propel the sailboat in an efficient manner. Thus, they were sailing ‘downwind to the eastern’ or Down East.”

In just one visit Down East, you will get a sense that there’s not much difference between the way things were and the way things are. The traditions of decoy carving, hunting, commercial fishing and boatbuilding and living off the land and from the water are still passed on from one generation to the next.

As you continue your scenic drive, the route switches to NC 12 at Sea Level. The view from the top of the Monroe Gaskill Bridge at Thorofare Bay looking out and over Cedar Island National Wildlife Refuge, the marsh seems to stretch out forever, as far as one can see. It’s the largest marsh on the East Coast. 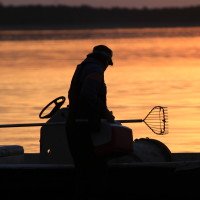 Clam rake in hand…it’s time to go to work. (Photo by Katherine Inabnitt) 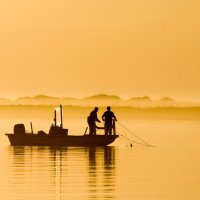 Fishermen off Cape Lookout check their net at sunrise. (Photo by Scott Taylor) 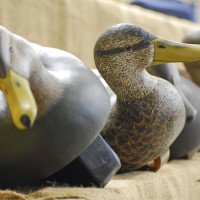 Decoy carving has been passed down for generations of families Down East. (Photo by Cindy Yount) 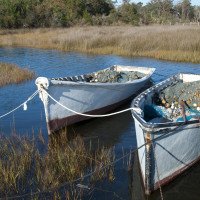 Boats are stocked with a fisherman’s tools of the trade. (Photo Cindy Yount)