Beaufort: ‘Historic and Fine since 1709’

Historian Martha Barnes says: “Some of our old homes lean and some of them leak and some do both, but the important thing is they are still standing. In Beaufort, if anything is imperfect in any way, such as leaning, leaking, rusting or anything else, we call that ‘Beaufort Charm.’”

“Many of our old homes are haunted. I tell everyone that this is such a wonderful place to live, that when people die, they just hang around, anyway.” Azaleas are plentiful in the Old Burying Ground in Beaufort. (Photo by Marie Freeman)

On a walk through Beaufort’s Old Burying Ground, you will come across the grave of a 19-year-old British sailor whose last request in 1744 was this: “Sir, put me in my uniform and bury me standing up, so that I can salute my country in death as I do in life.”

Perhaps the most intriguing graveyard story is about a young girl who died at sea, traveling from England to Beaufort during the 1700s. Her father purchased a keg of rum from the ship’s captain and sealed the little girl’s body inside. Upon arrival in Beaufort, the body was left inside the keg for burial.

All the graves face east so that when the spirits arose on “Judgement Morn,” they would be facing the sun.

Pirates and other rapscallions linger in Beaufort

Blackbeard, the most notorious Pirate in history, lived in Beaufort. During the Golden Age of Piracy (1689-1718), Blackbeard reportedly captured 40-45 ships. Plundering and pillaging with ruthless abandon was his style, preying on merchants ships passing by, moving up and down the eastern seaboard.

Blackbeard’s flagship vessel, the Queen Anne’s Revenge, was known to have run aground near Beaufort in 1718, but for more than 270 years, the location of the wreck was a mystery to archeologists around the world….

Until 1996, when divers discovered the wreck at the bottom of the Beaufort Inlet.

Today, the North Carolina Maritime Museum in Beaufort is the official repository for valuable artifacts salvaged from the wreckage.

Meanwhile, Beaufort is attacked annually by pirates during a Reenactment of the Beaufort Pirate Invasion. The town’s militia always manages to prevail.

Accolades Continue to Roll in for Beaufort

Beaufort lays claim to two “superlatives” earned in 2012 and improved upon since then.

First, Beaufort received accolades and the most votes in an online contest sponsored by Budget Travel Magazine to be America’s “Coolest Small Town.”

Then, Yachting Magazine announced that Beaufort was voted as America’s “Best Yachting Destination.” Editors wrote: “Beaufort…is yachting central. Its attractions will be obvious the moment you set anchor in Taylors Creek. The water looks a clear bottle green.”

More recently, Beaufort was selected by CountryLiving.com as one of America’s “Most Charming” beach towns, and Our State magazine featured Beaufort prominently in its June 2015 issue.

The Our State article defined Beaufort and Blowing Rock as “beautiful bookends to our state,” telling readers how they are “more alike than different” with their respective economies dependent on tourism.

Beaufort captures the essence of what an ideal coastal town “should look like and feel like…with its sailboat-studded waterfront and the old neighborhoods of white front-porch columns and live oaks….” 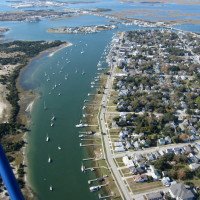 Beaufort has two “main streets” – Taylors Creek is a thoroughfare for boats and yachts…and Front Street runs parallel through the residential and shopping districts. (Photo by Tracey Brinson) 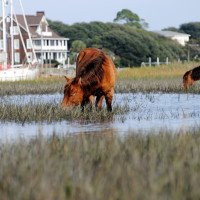 Beaufort has its own horses – on Carrot Island within the Rachel Carson Estuarine Reserve. (Photo by Dan Williams) 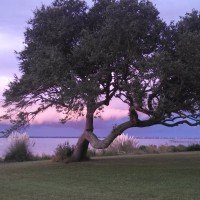 Beaufort: ‘Historic and Fine since 1709’ 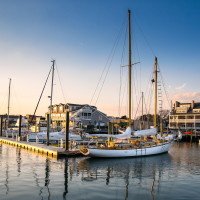